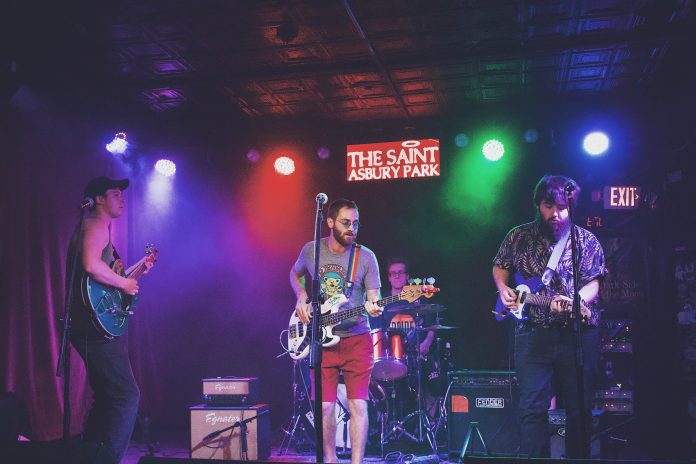 What do you get when you mix happiness, infectious melodies, and stoner whimsy? “Standing in the Sun,” by Smooch. Clicking ‘play’ on this track queues lighthearted vibes to scatter like auditory confetti—replacing inhibitions with a newfound reason to smile. Anyone within the confetti’s reach is bound to tap his or her foot too, and ask, “Hey, what song is that?” “Standing in the Sun” offers a simple solution to stillness and encourages listeners to let loose and enjoy the music.

This track is one of Smooch’s five, all of which were recorded by Adam Vaccarelli via live tracking at Retromedia Sound Studios in Red Bank, New Jersey. The recording features Jon Bass (pronounced like the fish) on lead vocals and the electric bass, James Eckert and Justin Murray on the electric guitar, and Owen Flanagan on the drum set and percussion.

Jon Bass, co-founder of the groove-driven, beach rock group, wishes he “had a joint to smoke, standing in the sun,” and who can blame him? Bass wrote the lyrics to “Standing in the Sun” while waiting for fellow co-founder, Justin Murray at a job interview. “I was literally in a sunny field,” Bass remembers, “and I just thought to myself, ‘I wish I had some weed right now‘”. It was in that moment the bass line came to his head and he began rhyming over the imagined groove. With a loose structure in mind, he returned to the car to find the notes on his Fender Jazz Bass and jot down some rhymes in his notebook. After the interview, Murray and his suit walked back to the car to find Bass in the passenger seat with a goofy smile on his face—”I wrote a song,” he laughed. To which Murray replied, “I got a job… I think?”.

Bass’s idea began to take shape soon after that day in the corporate parking lot. Once the bass line and lyrics in the first verse were established, the songwriter brought the foundation to the other members.  Bass was “willing to collaborate,” which left ample room for the “other funky cats in Smooch” to add their musical flare. Murray crafted a guitar lick, Eckert emphasized the bass line, and Flanagan delivered a backbone to perfect the feel. This open-minded style of songwriting allowed the track to take shape autonomously.

Co-founders Murray and Bass met in Ms. Green’s first grade class, and have since been best friends. Their friendship took a musical turn when, sometime in middle school, Bass dug his dad’s old guitars out from the garage. One chord turned into two more, until they eventually found themselves in the same dorm room at Monmouth University, writing songs there too.

Flanagan came into the picture during their first year of undergraduate studies at Monmouth. The scholars played in a number of projects together at MU, which allowed their styles to develop on a similar path. Bass and Flanagan were jokingly referred to as the “Monmouth Wrecking Crew” due to their heavy involvement with the school-run label “Blue Hawk Records”. The rhythmic duo recorded on over 12 tracks for Blue Hawk, fostering their chemistry in the studio. When the two childhood friends were looking for a drummer to record with, Flanagan was the obvious choice.

Eckert, a William Paterson Philosophy student, was introduced to the other three through mutual friends. The melodious guitarist has been writing and producing original songs for over 5 years. Once in a while, he would modestly email content to friends; but, he never decided to release his creations publicly. Once Eckert’s low-fi, emo-punk driven songs arrived in Murray’s inbox, he knew they had to work together and subject the world to the punk’s unique style.

Andy Jackle, another MU alumnus, is too a member of Smooch and continues to offer his percussive prowess as an asset to the band. Jackle plays in many other groups and, with his increasing involvement, is becoming more of an essential element of Smooch. Jackle played in a group called “The Emily Youth Project” with Bass and Murray during their time at MU. If it weren’t for conflicting schedules, he would have recorded on “Standing in the Sun” too.

After graduating from Monmouth, Bass and Murray began to record their song ideas as demos in Bass’s basement. They wanted a clearer image of how the songs should sound before playing them live or recording them professionally. Once they had a couple they were proud of, they sent them around in an effort to gather a group that could do the tunes justice. That’s when they roped Flanagan and childhood friend, Matt Inglese (keys), into recording their first two tracks at Retromedia and Eckert and Jackle into playing Smooch’s debut show at The Saint in Asbury Park. The broad range of talented musicians made it easy for the co-founders to recruit–it was just a matter of getting all of them in the same room.

Where They’re At Today

Murray got the job as a Financial Rep. at C&A Financial Group–allowing him to work on a career outside of music while reserving nights and weekends for Smooch. Bass worked most recently as a pizza delivery driver for Domino’s, but has since hung up his hat in an effort to focus primarily on Smooch and music in general. His charisma and love for music is the driving force of the newly founded group. Like Murray, Eckert leaves his nights and weekends free for the band. He spends weekdays tutoring students with learning disabilities at Lindamood-Bell Learning Processes. When Flanagan is not behind the counter at Barnes and Noble, or behind the kit for a multitude of other bands he’s a part of, he’s pursuing a Master’s degree in History at MU. Jackle works as a server at Woody’s Ocean Grille. Smooch exists when the quintet can circumvent their post-undergrad schedules.

Smooch is a collaboration of like-minded musicians–it exists for the purpose of fun and fun alone. For now, the band plans to continue gigging around New Jersey and recording original music. The extent of their anticipated success depends on the resonance of their latest material with local audiences. To keep up to date on all that is Smooch, follow them on Instagram @SmoochTheGroup. “Standing in the Sun” can be found on all major media platforms. 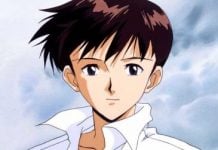 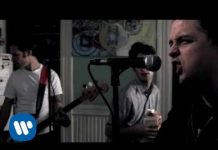